Deciding on the right Python developer salary first requires complete knowledge of how to look for the right candidates, what is the current demand and payout, and what factors affect the Python salary in the USA.

Think Python is not in demand anymore? The following statistics will make you think again:

Python adoption is on the rise and will continue to grow, thanks to the increased use of Machine Learning (ML), Artificial Intelligence, and Data Analysis (DA) by organizations and the topics have become the part of most crucial Python interview questions.

It’s only natural for recruiters and hiring managers to get curious about the salary for Python developers.

Let’s get to it right away.

When it comes to assessing the Python jobs salary of developers, there are multiple factors to consider. Let’s understand what these are:

Established giants in various industries actively use Python. For instance, Netflix uses Python throughout its content lifecycle, which includes deciding which content to fund. Furthermore, Python is recognized as an official language at Google today, along with C++ and Java.

With Python becoming the favorite coding language for firms the world over, comparing the Python salary becomes crucial so that your organization can get the best talent at a competitive rate. In fact, Python ranked first among the top 25 most in-demand data science skills in 2021.

A Python developer’s salary is also dependent on their level of expertise and core skills possessed (think: knowledge of relevant frameworks, AI, and Machine Learning, ORM and Python libraries, front-end technologies such as HTML5, CSS3, and more).

Soft skills include the ability to problem-solve, communicate effectively, handle projects on time, and so on. Depending on the soft skills they demonstrate, the salary ranges might differ.

Other important and basic parameters that you may need to consider while reviewing the Python developer’s salary include the location of the talent, company size, cost of living, and more.

Without knowing the major Python developer skills as well as comparing the Python salaries, you will not be able to create a compelling offer and might lose out on high-quality prospective candidates in the process.

These skills may also be listed in the Python developer resume and can be tested live in the interview as well.

Python Salary: As Per the Experience

As mentioned earlier, the Python programmer’s salary is dependent on the level of experience they demonstrate. 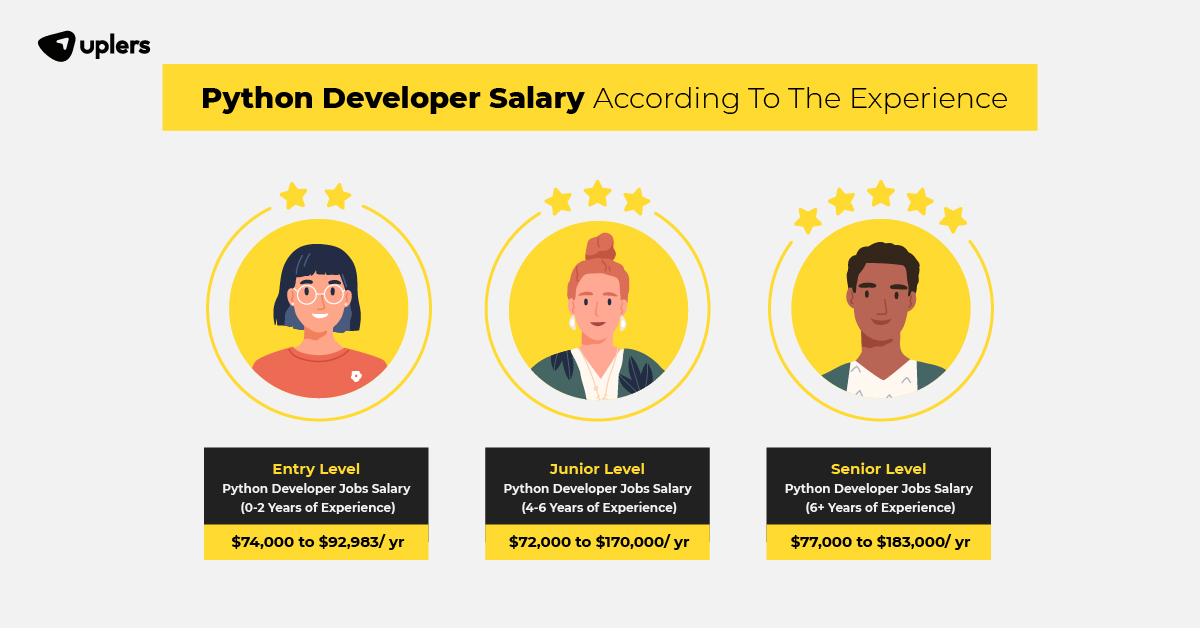 As recruiters and hiring managers, you should have a ballpark figure of what to expect for a Python developer average salary at the entry-level, junior level, and senior level.

According to Glassdoor, a beginner Python developer salary can range between $74K to $118K, depending on the experience level. The starting amount for an entry-level Python salary in US is $60K.

In addition to Python skills, the candidates must possess additional skills such as problem-solving, excellent communication, and the ability to use Python applications in sync with other software architectures.

According to Glassdoor, a junior Python developer salary, with 4 to 6 years of experience, starts at $72K and can go up to $170K. The average jr. Python salary is $109,426 per year. The Python developer’s junior salary may increase if the candidate demonstrates the following additional skills:

The same Glassdoor estimate predicts that a senior Python developer’s salary with 7+ years of experience is around $117,707 per year. The starting range is $77K and can go up to $183K. At this point, hiring managers must look at senior-level developers who can do more than just develop algorithms/architectures using Python. They must:

Python Salary: As Per the Type of Hiring

Now that you have a good understanding of the Python salary with respect to the experience level, let’s deep-dive to understand how the salary varies depending on the Python developers for hire type: 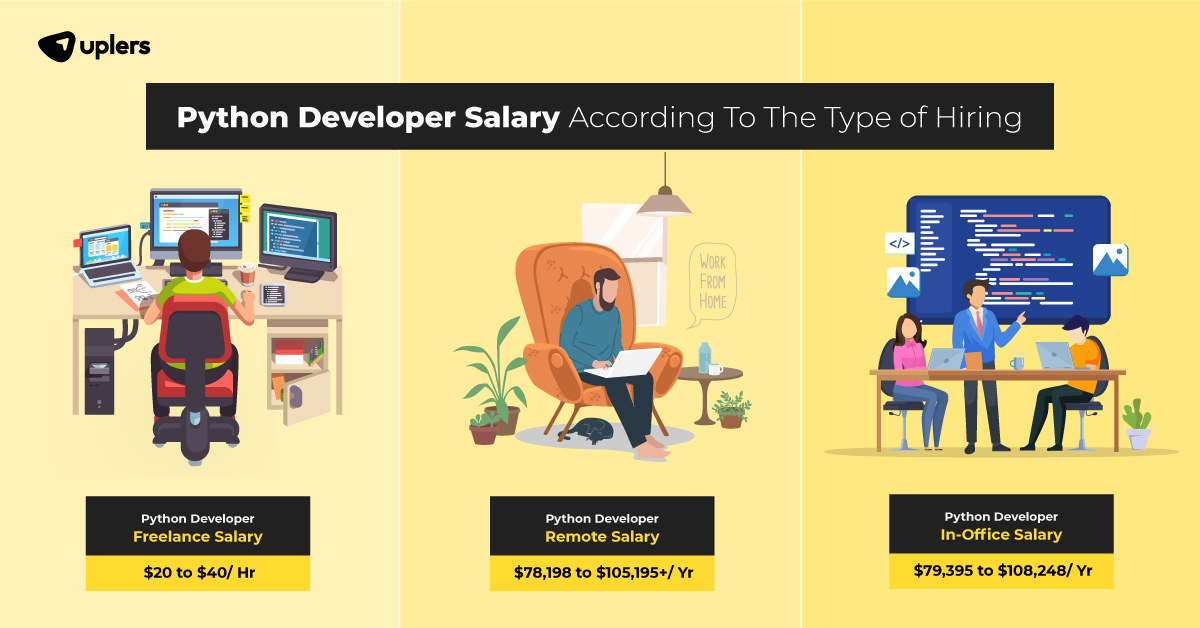 What is the Average Salary of a Python Developer in the US?

The Average Python developer’s salary in the USA is around $108,248 per year.

And here’s the average salary of a Python developer in the US according to four leading recruitment platforms:

Here’s the average city-wise Python salary as per AmbitionBox:

A freelance Python salary on an average is ₹3,37,121 according to Freelancer.com. The job role can also entail additional responsibilities such as that of a Python Web Developer, Data Scientist, Machine Learning Engineer, etc.

According to PayScale, here are the top 10 skills that can affect a Python salary:

Average Python Salary in Other Countries

When it comes to analyzing the average Python developer salary in US per month, you need to take into account key factors such as the cost of living, the number of available Python developers within the country/state/city, etc.

For example, the entry level Python salary in Canada is $58,654 whereas the entry level Python salary in USA can be anywhere between $79,804 to $102,769. If the local talent is low in intensity, the average Python developer salary US will be higher. Let’s now look at the average salary of Python developer in US and other countries, according to Glassdoor:

A certified Python developer salary will also vary if they specialize in other languages. 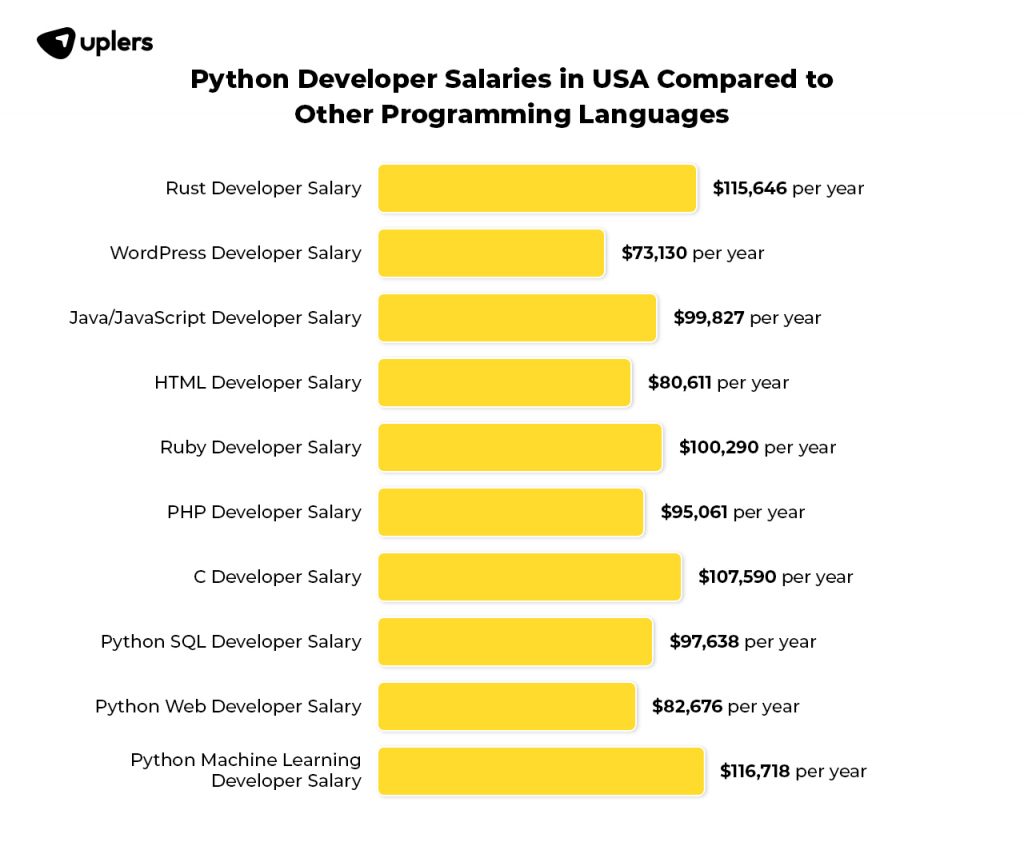 Common factors to look out for when assessing the candidate’s salary include the speed-to-competence of the specific language in question, how commonly the candidate uses it, and the level of expertise as well as skills demonstrated in the nuanced applications.

Here are the recommended salaries according to Glassdoor for the popular programming languages in addition to a working knowledge of Python:

The takeaway: Depending on your organization’s requirements, having a candidate with additional coding expertise in a related programming language can turn out to be a game-changer. So, when hiring, make sure to understand your project and organizational goals.

Python is the bedrock of most websites and software apps. This programming language also comes in handy during data analysis. For developers, Python is easy to code, is a scalable alternative, and provides a variety of libraries as well as designs.

If your organization deals with Data Science and Machine Learning, hiring Python developers makes business sense, as these developers can effectively extract meaningful and actionable insights from large data sets.

Q. Is Python development in demand in the USA?

This is why the average salary for a Python developer in the US is $108,248 per year–one of the highest worldwide.

Q. What factors affect the salary of a Python developer?

Q. From where can we hire Python developers?

You can hire Python developers from various online recruiting platforms such as LinkedIn, Github, Stack Overflow, Upwork, etc. Alternatively, you can hire from India’s largest talent network with pre-vetted 50,000+ professionals on Uplers.

Q. What is the right salary to hire a remote Python developer from India?

The average salary of a remote Python developer is $48,918 per year. However, Uplers offers Top Python Developers starting from $3000 a month.

There you go. Having been introduced way back in 1989, Python continues to dominate the programming language world. Its limitless capabilities for concise programming, easy-to-use code, and an uncluttered and user-friendly program design, make it a hit among developers and data-heavy enterprises alike.

With a good understanding of the average salary for Python developers, you can easily do your homework and create the best offer that the top talent might find difficult to refuse. If you are looking to hire certified Python developers, consider Uplers–India’s largest top-talent network.

You can hire from a pre-vetted talent pool of certified developers with years of hands-on experience across industries and use cases. Let us work together to get you your star Python Programmer within your budget and without compromising on the talent quality.