With Google’s broad core algorithm update coming in, is your website ready? Google has begun rolling out its July 2021 core update. It will take about a week or two for this update to go live. It is a continuation of last month’s core update.

Earlier this week, Google explained the procedure on its Twitter feed, Google SearchLiaison. Their developers are currently working on the remaining changes that will be included in the Core Update in July. 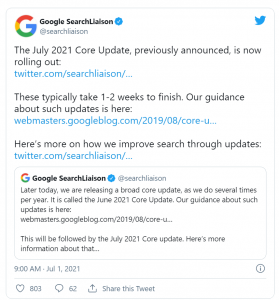 Google algorithm updates may adversely affect your results for some time before they recover. This new update from Google’s ranking algorithm will therefore act as a recovery for those sites that were affected by last month’s update.

In addition to this broad update, there are numerous other updates, such as:

What to expect from this update?

With the July 2021 ‘Broad Core Update,’ Google aims to assess content better and determine what pages provide the best answers to searches.

It appears that Google gave too much weight in the June update to some SEO classics, such as domain age and backlinks, or that Google weakened aspects in previous updates – and intends to fix these mistakes in the subsequent July update.

Due to these changes, some websites may lose traffic, while others gain it. Boosts can now be given to pages previously under-rewarded.

How Does the July 2021 Core Update Affect You?

In the ranking of web pages, core updates primarily generate volatility, fluctuations, spikes, and drops. It is important to remember that a core update is simply a software update that will not attack your website or individual actions.

Google rolls out broad updates regularly along with the ones targeting spam, product reviews, and slander. The main consequence of these updates has been a significant increase in fluctuations in web page rankings on Google. It is important to examine your website’s content in case it has been compromised.