Front-end developers work with the client-side programming of websites. They are naturally in high demand.

The salary of a front-end developer in a company like Apple, Facebook, or Google can be as high as US$400,000 annually. Even the package offered by startups is fairly high in the US.

The following graph gives an idea of the average annual cost of hiring front-end developers in US$. The data is of October 2018 from 8 different countries spread across the globe: 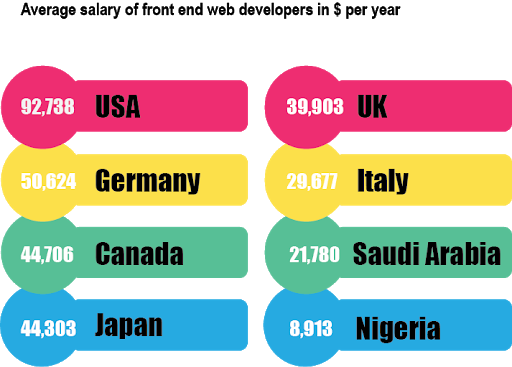 Why Front-end Development Is Complex

Experts in web development believe that front-end developers have a tougher job than their back-end counterparts. The reasons are as follows:

A scan of job postings for hiring front-end developers across the globe reveals an interesting feature.

A number of companies, the tech giants included, ask for some human skills before they go into technical skills. The reason is, without these basic human skills, even a tech genius will be unable to work effectively in a collective workspace.

More importantly, the front-end developer needs to keep the user in mind. That, too, is impossible with just tech skills. It needs the human skills listed below:

You’ll have a team with the entire range of skill-sets mentioned here. A team that is capable of learning on the job and adapt.