ReactJS is nowadays one of the most popular JavaScript libraries to create an interactive user interface. It brings together the speed of JavaScript with a new way of rendering webpages, making them dynamic and responsive to user input.

This is why ReactJS front-end developers are so much in demand. Their skills with this framework create quality interfaces. The best ones have:

Reasons for the Popularity of ReactJS

ReactJS was one of the first JavaScript-connected projects. It was initially released as open-source by Facebook. 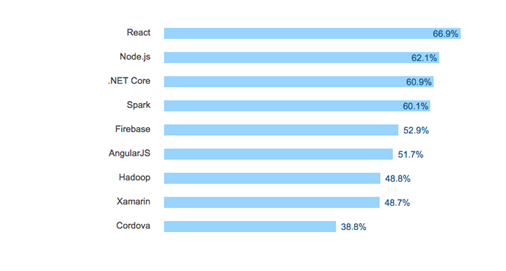 Unlike other frameworks, ReactJS doesn’t use a model-view-controller structure. Instead, it encourages the developer to work with reusable UI components. This is ideal for presenting data that changes over time.

This flexibility is why it has been quickly adopted. It has several advantages:

ReactJS also has all the advantages of free access. There are several useful applications and additional tools from off-company developers.

In this way, the lightweight and dynamic nature of React JS makes it the preferred choice for front-end development.

ReactJS makes it possible to create compelling and immersive interfaces that companies need in order to be noticed online. As such, ReactJS developers are in great demand.

As it was introduced by Facebook only in 2013, most people have limited experience in ReactJS. It is based on JavaScript, and it is simple to learn, but that doesn’t mean it’s easy to gain proficiency.

Typically, such developers are already working with companies and start-ups that have seen the value of ReactJS and are keen to capitalise on it.

Some of these are: Facebook, Dropbox, Khan Academy, Netflix, Airbnb, PayPal, Walmart, and Tesla Motors. In addition, there are many current apps that also use ReactJS.

All of this means that a proficient ReactJS front-end developer is in an enviable position. He or she is likely to be snapped up quickly by a well-regarded company, in a fulfilling position.

Careful. Not All ReactJS Front-end Developers are the Same

You can certainly come across people who know JavaScript and also have some experience with ReactJS. Before you rush to work with such developers, there are some things you should know.

For starters, here are some of the skills that good ReactJS developers should possess:

It’s clear, of course, that a professional and experienced JavaScript developer will be more skilled with ReactJS. It’s also important for such a person to have exposure to front-end development, which not all of them have.

For these reasons, you should make sure that the ReactJS front-end developer you’re thinking of hiring is really the right choice. They have varying levels of experience and expertise.

The Consequences of Choosing the Wrong ReactJS Developer

The time taken to hire just the right developer can cause anxiety levels to rise. However, choosing the wrong one can lead to very unfortunate results.

These are some of the issues that can crop up:

Issues of Authentication and Authorisation: These are critical in today’s security-conscious time. If such concerns are not handled properly, the company information and operations could be at risk.

Issues of Scalability: Once the operation grows, it’s a waste of time and effort to rewrite parts of the application. These need to be built-in from the start so that scalability does not turn into a web development problem.

Issues of SEO: As with scalability, proper SEO ought to be kept in mind from the start. Too often, an inexperienced developer will leave this for the final stages, when content is created. Sometimes, this can mean that large parts of the system need rewriting.

Issues of Bandwidth: When it comes to development and testing, fast connection speeds are the norm. But this may not be the case in a real-time consumer environment. If not addressed, this leads to frustration.

Issues of Screens and Browsers: Today’s customer accesses the web in a variety of ways. There are tablets, mobile phones, and desktops, and there are also a variety of web browsers. The front-end development needs to optimise for all of these.

As you’ve just seen, ReactJS is a great way to render your webpages. Its popularity means that good developers are hard to come by, and choosing the wrong one could lead to undesirable consequences.

Is there a way out? Yes, there is. All you need to do is look at on-boarding an efficient team of offshore developers, such as Uplers.

There are several advantages to this. Among them are:

You’ll also be pleased to find that Uplers is one of the largest, globally recognised outsourcing agencies, empowering businesses like yours across the globe to build a better digital ecosystem.

From front-end development to white label web design to digital marketing campaigns, Uplers makes all of this accessible and effective.

Tell us about your ReactJS development needs, and we’ll offer you a solution that will delight you.