Inquire, Interview and Hire within the next 7 days.

Our Talent Success Coaches do all the hard work so you don’t have to. You simply conduct an interview and select the best. We match the right talent to your business needs thereby giving you the freedom from pre and post hiring responsibilities.

Would you like to hire a
dedicated Android Developer
who is both brilliant and
culturally fit?

50,000+ talents have been screened for their technical skills, language proficiency, and behavioral aspects - so you get the best one for your company.

Hire your Dream Team
How?

How to hire Android Developers through Uplers?

Our Dedicated Android Developers can help you with

We take the hassle out of developing for Android. Our team of top-notch developers is proficient with creating enterprise apps that work on various devices, including smartphones and tablets.

Our team of talented Android developers specializes in developing native mobile applications. They will help build an app that fits your needs, no matter how complex or simple they may be!

Hybrid apps are now the new way to develop engaging mobile applications. Utilize our top-of-the-line expertise, which allows you to build apps for multiple platforms with shared codebases- all while saving money!

Unlock the potential of your app with our team's expertise. We offer assistance with connecting your Android mobile apps with different IoT devices to transform your business processes at a large scale!

Let us take care of keeping your Android-based apps up to date with the latest trends. Hire our Android developers for run-time maintenance and smooth functioning of the mobile apps.

Still got questions? Schedule a meeting with our Tech Expert. 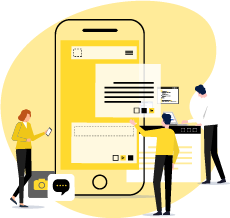 How do I hire Android developers through Uplers?

Follow our simple 4-step hiring process starting by sharing your requirements. We will shortlist top matches and jump on a call to get a better clarity as well. You can interview the shortlisted candidates and then decide to make the final call.

What is the cost of hiring an Android developer through Uplers?

The cost of hiring an Android developer through Uplers depends on the level of expertise you need for the job i.e. a junior level, mid-level or senior level. We charge approximately $25 an hour, which is subjective to multiple factors.

Can I hire an Android developer for hourly or project based tasks?

Yes, we have a flexible hiring model to cater to your hourly or say project-based tasks.

How do you vet Android developers?

The benefits of hiring an Android Developer from India are you can save up to 50% on salaries, flexible hiring models, zero recruitment costs and no pre-hiring or post-hiring responsibilities to manage. Our talent curators take over the legwork and give you freedom from the tedious hiring process.

Get
Rate Card in
your Inbox