Are you considering becoming a WordPress developer or looking to hire one? Want to know the average WordPress developer’s salary? This blog is for you. Before we jump into the numbers, let’s understand the current lay of the land for WordPress. As per research:

We also recommend mentioning these points in your WordPress developer job description. So, let’s jump right in.

Why Compare the Average Salary of WordPress Developers?

While comparing salaries is not taken with good intention, it is necessary if you want to maximize your earning potential. Plus, the 2021 Compensation and Culture Report from Beqom suggests that 41% of employees are not comfortable talking about pay.

So what do you do to get into the nitty-gritty of the  WordPress developer salary? You compare salaries and arm yourself with the requisite knowledge. Here are a few compelling reasons why you should compare the average salary of WordPress developers.

Why Compare the Salary of a WordPress Developer: Developer’s Perspective

Why Compare the Salary of a WordPress Developer: Client/Recruiter’s  Perspective

The takeaway: There is no standard rate when it comes to a WordPress web developer’s salary, working on a freelance basis. While budgeting, keep this point in mind. This is because the WordPress developer’s salary depends on your project needs, the kind of work expected, the industry, and the kind of specialized skills they are bringing to the table.

For organizations and business owners, the cost to build a WordPress website can take a heavy toll on their budget. This is why hiring the right kind of WordPress developer is key.

So, analyzing the average WordPress developer salary can help you to compare your offer against the industry benchmark so that you get access to high-quality talent at an affordable cost.

What is the Average WordPress Developer’s Salary According to Different Job Sites?

Let’s look at the average WordPress developer salary as posted on different websites:

Here are a couple of points to note:

Since freelance developers are dispersed throughout the globe, the freelance web developer’s salary for these marketplaces considers at global rates. Also, most freelancers charge on a per-project basis or an hourly rate.

General freelance marketplaces include Upwork, Fiverr, Freelancer.com, and People Per Hour. All you need to do is sign up and get started as a freelance WordPress developer across these platforms; there is no vetting process involved:

WordPress Developer’s Salary Based on Job Role and Experience

In this section, we will look at the basic WordPress developer salary based on job role and experience as the key parameters.

Please note that numerous factors affect WordPress salaries such as your level of experience, job type, type of employment, and location. 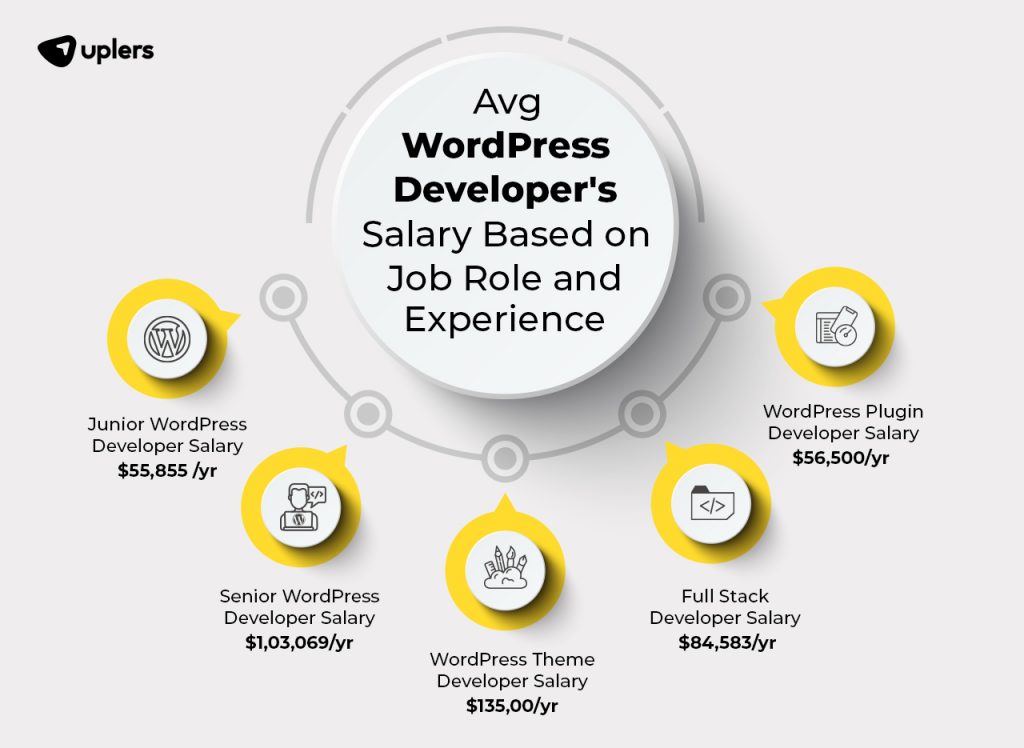 To be able to qualify as a senior WordPress developer, you should have a minimum of 5 years of experience and a bachelor’s degree at the minimum.

When it comes to understanding the average salary of a WordPress Theme Developer, you need to make a note of the following points:

According to ZipRecruiter, the full-stack WordPress developer salary is $84,583 a year in the United States, which comes up to about $40.66 an hour. On the other hand, according to Indeed.com, the average base salary for a full-stack developer is $100,400. These developers also reportedly get a $5,000 cash bonus per year.

The role of a full-stack developer includes the following:

Note that the top earners (90th percentile) earn about $106,500 annually in the United States. A WordPress plugin developer must have the following skills:

Let’s look at the WordPress developer’s average salary in the USA with location-wise segregation.

According to Talent.com, here’s a quick region-wise breakup of the WordPress developer salaries:

On the other hand, as per Indeed, here’s the list of top-5 highest paying states in the USA.

Data by Indeed also suggests that around 50% of WordPress developers in the United States think their salaries are enough for the cost of living in their area.

WordPress Developer Salary in Other Countries

According to estimates by Beetroot, WordPress developers are compensated differently depending on their geographical location and seniority. Here’s a quick breakup of the same: 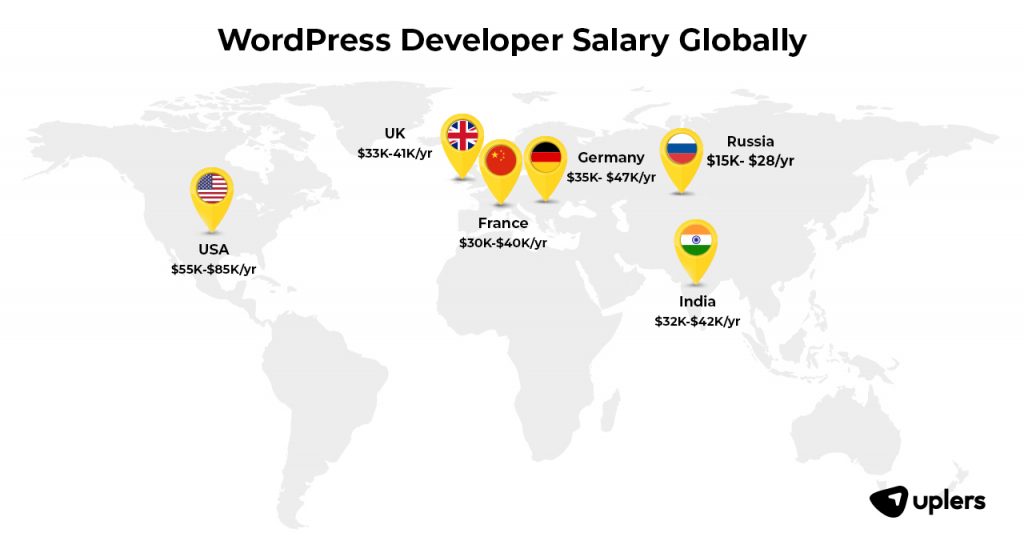 Plus, as per a Codementor survey, the average WordPress developer hourly rate globally is as follows:

The Hourly Rate for Freelance Web Developer for:

What is the Right Salary to a Hire WordPress Developer? 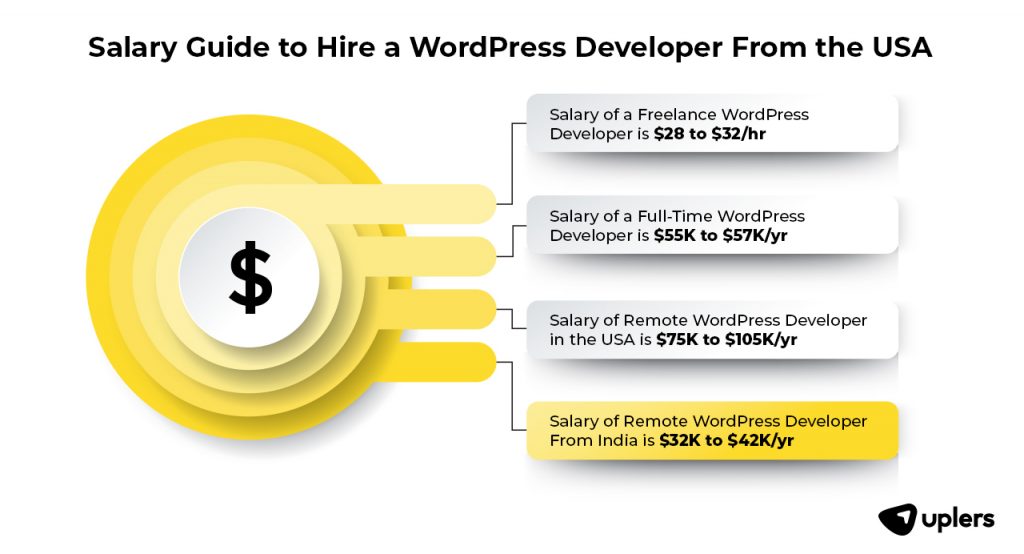 A. Salary for a Freelance WordPress Developer

B. Salary to Hire a Full-Time WordPress Developer

Based on the salary ranges provided in this blog, the right salary to hire a full-time WordPress developer is $57,540.

C. Salary to Hire a Remote WordPress Developer in USA

Understandably, the WordPress specialist salary is a hot topic in the developer world. Every aspiring developer wants to deliver meaningful work and be fairly compensated for it. Because let’s face it: Building a high-performing WordPress website is a tall order and requires a cocktail of skills, expertise, knowledge, time, and patience.

Get started with your WordPress website on the right note by hiring WordPress developers who are skilled, dedicated, and fast in their approach and work style. Once you’ve got a professional team in place, consider half the job done.