AngularJS developers are experienced JavaScript programmers that have a thorough understanding of theoretical Angular software engineering. Thus, there are multiple angular developer skills that one needs to be a successful Angular developer.

With Angular Java coding, AngularJS engineers specialize in creating Single Page Applications (SPAs). They create everything that a user sees and hears on a website.

AngularJS, unlike some other JavaScript frameworks, requires developers to follow the “Angular” approach, which is a set of principles and practices that allow developers to get the most out of the framework and create powerful, efficient web applications.

This necessitates engineers knowing AngularJS inside and out rather than merely being great JavaScript coders.

As a result, the demand for Angular developers is always high.

There are a few things you should know before hiring an AngularJS developer. Putting out a generic JavaScript developer job ad will bring in a lot of applications from people who are good at JavaScript but don’t know anything about AngularJS.

This article will offer you a sample AngularJS developer job description that will assist you in creating a flawless job ad and ensuring that you find and employ the right person for the position. 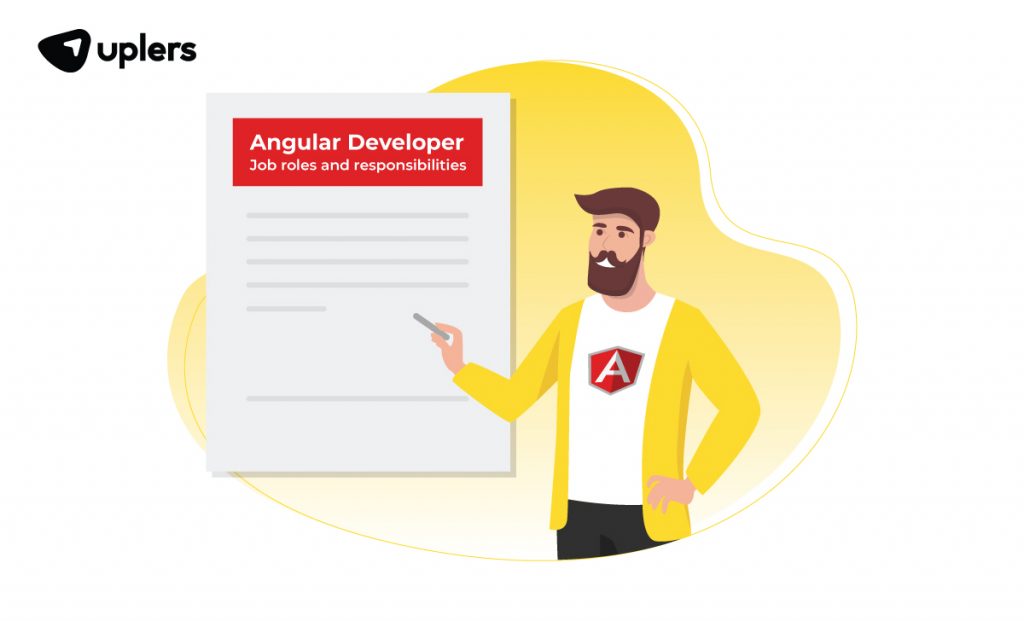 One of the main Angular developer responsibilities is to work closely with web developers and backend engineers to create high-performing, responsive, and interactive web applications.

Here is an Overview of the Angular Developer Job Role

As Angular developers, they will have an important role in developing and maintaining web applications.

The Angular developer will be responsible for ensuring that these applications are performant, secure, and easy to use.

In addition, they require to contribute to the development of new features and functionality.

The Angular developer responsibilities and roles may vary depending upon their experience and expertise level.

More or less, you’ll have to prepare a JD that clearly states what you’re expecting from them. Also, a pre-selected list of AngularJS Interview Questions will help you find a better candidate.

There are various soft skills and hard skills that you need to look for in the candidate. We have laid down some of the most essential Angular developer skills that make a candidate worth it. 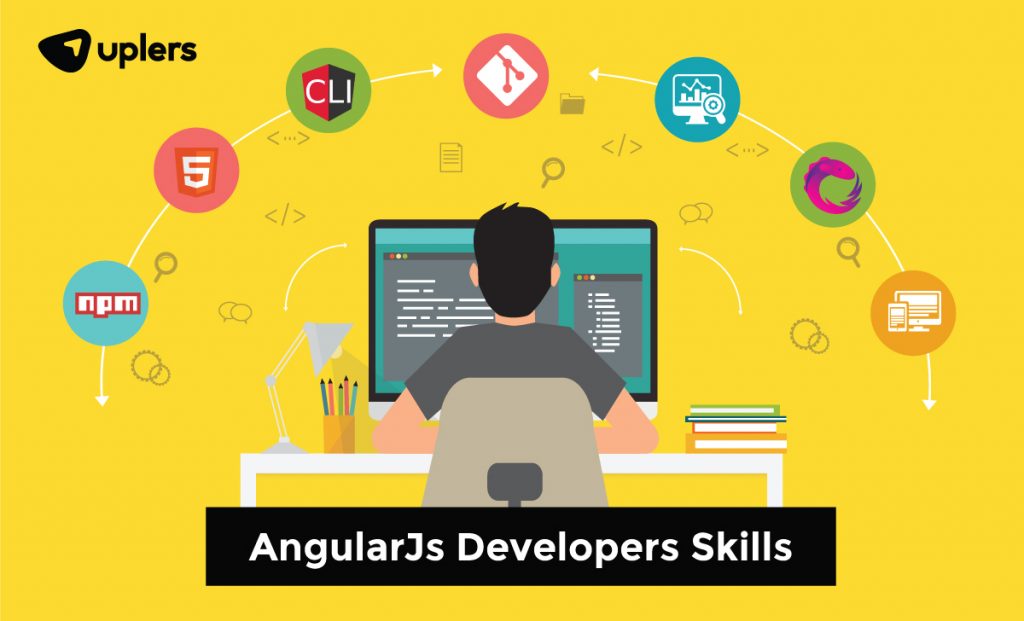 The entirety of this popular JavaScript framework can be found in multiple modules across different projects.

When you hire someone with sound knowledge of Npm, they will be able to cater to the updates and changes as your application grows.

You may be wondering what it takes to create a fully-functional and beautiful application. Well, there’s nothing basic about Angular!

Knowing HTML and CSS is one of the most important Angular developer skills.

Angular provides the building blocks that allow the developer to build fast and functional apps. This can be made possible if the developer knows how to render these apps in a browser by working on HTML along with CSS.

HTML and CSS are essential front-end developer skills. A knowledgeable developer will be able to tweak things to provide you with a customized experience to deliver exactly what you’re looking for.

One of the main Angular developer responsibilities is to create new projects using best practices, templates, and the top Angular framework. Angular CLI is one skill that enables that!

It also simplifies code with its preconfigured configs, ensuring your app is up-to-date in no time! This makes it one of the most essential Angular developer skills.

Alongside these features, there are other advantages like reduced development costs. This is perfect if you’re a small business that wants its work done faster without having to hire multiple developers to perform any extra customization.

Git is a powerful tool that you can use to keep track of your project changes.

It will also notify if something has been deleted or modified in the code, giving peace of mind while working on complex projects with many people collaborating remotely over email threads.

The best part? You don’t need any extra software – your developer will just install what’s offered through their website (and yes it includes source control). You can use a progress tracking tool like Tara to simplify your work. Tools like this are user-friendly and have direct Git integrations, which makes it easier to manage your workload.

Git is the best way to work with any application by using source control. Git is one of the most important Angular developer skills which helps in building new features or coding techniques.

With GIT, it is easy to return if something goes wrong–using Git will give all your crazy ideas some steam while still keeping everything working properly so there are no worries about losing progress.

Developers must be able to find and fix errors for their apps, websites, or software products to run smoothly.

One of the main Angular Developer skills is a deep understanding of how programming works as well as being skilled at reading through other people’s codes with pinpoint accuracy. Based on this, it is how top Angular development companies filter the best talent.

This way, your developer will be able to identify any problem areas before those issues become widespread.

A lot of times, Angular front-end developers who are not very proficient with testing and debugging end up trying unsuccessfully to solve one issue after another which creates an even bigger mess!

There are a variety of techniques for testing that one can utilize. The functional test verifies whether or not your product meets all requirements and specifications listed in the development document.

This is useful when you’re trying to figure out if there’s something wrong with one small part but don’t know how exactly else to get started.

When designing an app, one crucial Angular developer skill is to think about how to handle the data.

The library RxJS offers a reactive stream that can be found in many modern frameworks, such as Angular.

RxJS is ideal to use where you need an asynchronous workflow but doesn’t want your code to become cluttered by all its detailed work behind the scenes.

One of the main Angular developer skills is a good understanding of responsive design.

The digital age has been an exciting time for developers who work with web technologies.

New devices such as tablets and smartphones require apps to be designed so they can interface properly while also rendering correctly on different screen sizes.

The right Angular programmer will be able to design a responsive website. They will ensure that your business reaches all audiences.

A responsive design will ensure a seamless browsing experience regardless of the device.

To Sum it Up

Hiring an Angular front-end developer who fits perfectly with your organizational goals and responsibilities can be challenging. As there are a lot of things you should know before hiring Angular developers. However, with the right talent sourcing company like Uplers, you can get access to the top talents.

We matchmake these candidates according to the Angular roles and responsibilities that you’re looking for.

Every candidate in our pool goes through various rounds of interviews to make it to the final stage.

All you need to do is share your Angular developer job requirements with us and we will find the ideal match for you. Once you conduct the final interview round, you’ll be able to make the final call.

Want to work with the best remote talent? Get in touch with us and Hire AngularJS Developers with the exact skills that you’re looking for!